Protect yourself and others: take precautions against COVID-19.

Practice proper hand-washing and use hand sanitizer if soap and water are not available. Maintain a six (6) foot distance from others and avoid large gatherings when possible. Avoid touching the face or shaking hands. Disinfect frequently-touched surfaces such as doorknobs and handrails. Stay home if you are sick.

Locust Grove, established in 1893, embodies a charming and inviting community quietly nestled where Macon and Atlanta meet. Cultivated by generations of families building their legacies within the bricks of historic Main Street, Locust Grove encourages a community where everyone is your neighbor, always willing to help and spark up a conversation. Where convenience and opportunity combine, and where history is respected and inspires a renewing future, Locust Grove always has been—and will always be—where you belong.

The city of Locust Grove derived its name from a beautiful grove of locust trees that could be seen throughout the town. This tranquil Henry County community is a place for combining tradition with change. Locust Grove was a major rail distribution center for cotton, peaches, and other farm products. The city had three cotton gins and several warehouses. In 1870, the first store was built on Main Street.

In 1893, the town was incorporated and the papers were officially signed on December 20, 1893. The original city limits extended quarter of a mile in every direction from the train depot in the heart of town. The city government consisted of one mayor and five council members. The first to fill these positions were appointed until elections could take place. The first mayor was M.P. Sowell. Those appointed to the first city council were: G.P. Combs, C.M. Mahone, J.L. Gardner, R.C. Brown, and W.H. Peek. The first city clerk was C. W. Williams.

The first ordinance passed by the city council restricted the speed of the trains to 15 miles per hour. There were questions on how to enforce this because the city did not have a police department at that time, but the railroad was notified. The town was reincorporated in 1922 and a new charter was established.

One of Henry County's most important landmark buildings is the Locust Grove Institute (LGI), founded by The Locust Grove Baptist Church and Mercer University. In 1894, the first building of the Institute was erected and the school opened its doors on November 1, 1894 with thirteen students and two instructors. By the end of the school year, eighty-five students had been enrolled. LGI grew rapidly and several houses in the community, such as the Combs-McKnight-Morfoot House shown below, were used as boarding housing to help accommodate the growing student population. 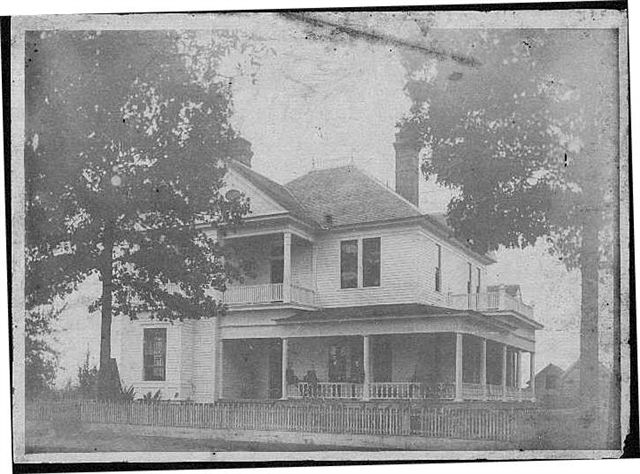 The Locust Grove Institute served a very important purpose by providing top-notch college preparatory classes and was one of the first schools in Georgia to be accredited by the Association of Schools and Colleges of the Southern States. The curriculum stressed learning in all facets of life, but its primary goal was character building. The academic building was constructed in 1904 for a total cost of $14,000.00. The original building was destroyed by fire in 1906. In 1918, LGI began a military training program for its students. In 1919, the Institute transferred all property titles to the Georgia Baptist Convention.

Our City has a strong heritage roots that are firmly planted. Locust Grove is a blossoming community that looks forward to the future with great expectations. 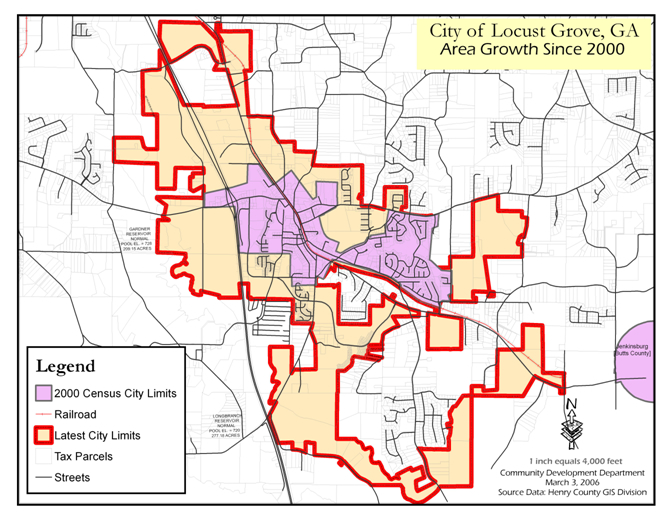 Locust Grove has experienced tremendous growth in population and in businesses coming into the area. In 1900 the population of the city was 254 and grew over time to 2,322 by 2000. Since 2000, the city expanded its boundaries by more than 400%, increasing from 2.2 square miles to now over 10.8 square miles, growing in each direction from the original town limits. Due to sound investments in water and sewer resources, the city also has more than doubled since 2000, to an official 2010 Census figure of 5,402 residents with the immediate ability of existing development to easily surpass 10,000 once the economic conditions recover fully. The most recent additions and subtractions to our boundaries keep us at nearly 10.5 square miles and helps to better serve citizens and business in the future.

The City of Locust Grove is located along I-75 at Exit 212 (Bill Gardner Parkway), with access to State Route 42 (US Highway 23) and other major roads connecting the city to Atlanta, Macon, Griffin, Jackson and other areas of Henry County. The city is located about 35 miles southeast of downtown Atlanta and about 30 miles from Hartsfield-Jackson International Airport, the world's busiest airport. Traffic counts on I-75 are approaching 90,000 vehicles on an average day, while traffic counts along Highway 42 top 20,000 vehicles per day in the heart of the city. The second-most traveled route is the connecting road between I-75 and Highway 42 (Bill Gardner Parkway), with the 5-lane section topping 23,000 vehicles on an average day. Plans are underway to expand Bill Gardner Parkway from 2 lanes to 4/6 lanes on the west side of I-75 towards Highway 155 and towards the City of Hampton and the Henry County Airport, currently being expanded to over 5,000 feet to incorporate private and corporate jets in addition to the existing general aviation facilities.

The City of Locust Grove historically was a center for large agricultural concerns with such products as cotton and peaches. Now businesses are more diversified, with industrial, warehousing, retail, medical and government services the primary sectors of the local economy. As typical with a bedroom community, the bulk of city residents commute into the greater Atlanta region for work. As the South Henry area continues to grow, however, the city will likely become a job-rich area for retail and service industries.